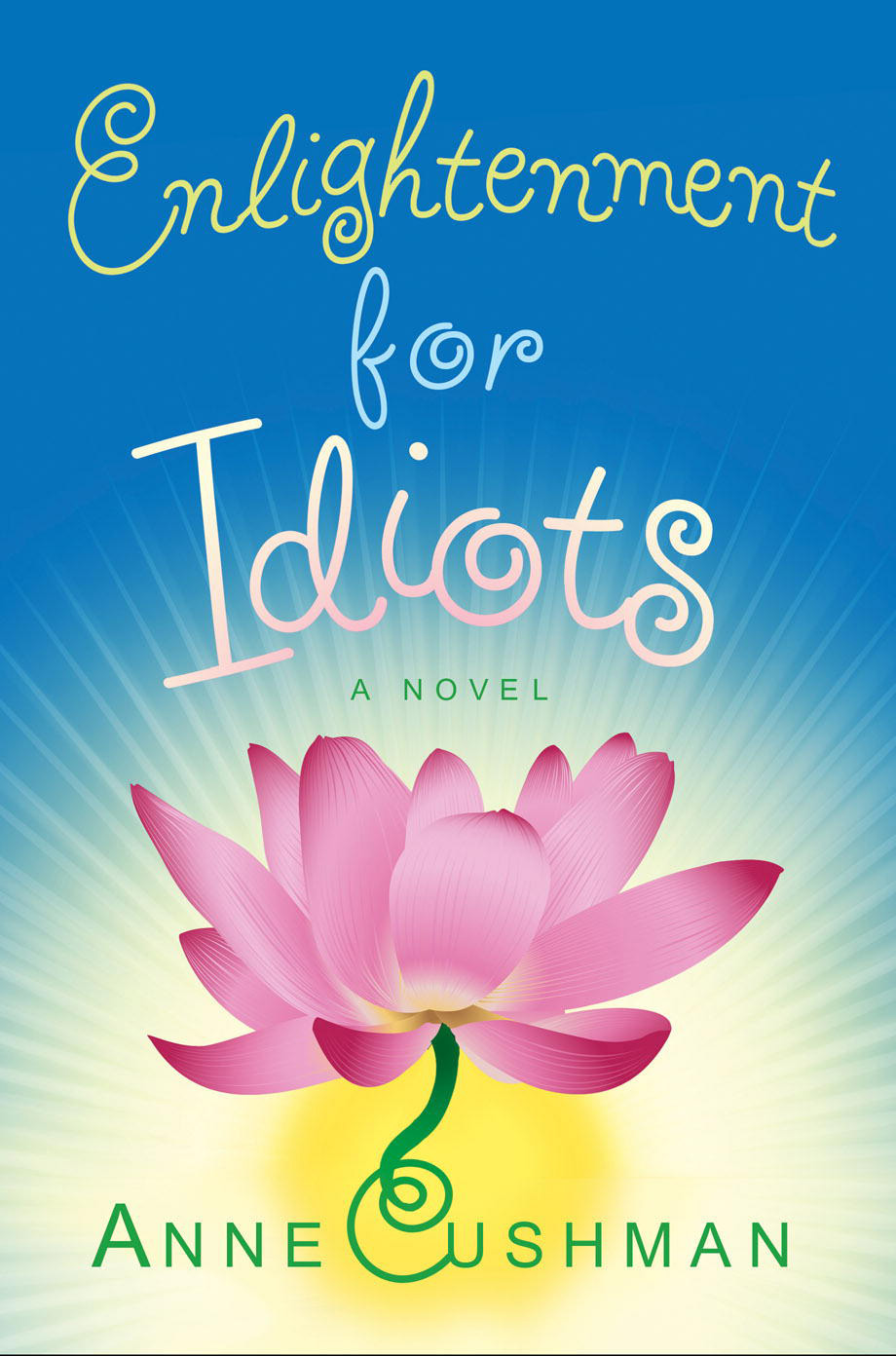 Named one of Booklist’s
“Top Ten First Novels in 2008”!
Now in paperback!

“A hilarious take on the quest for truth that manages to respect the journey while skewering many of the travelers… Cushman brings devastating wit and a thorough knowledge of her subject to her first novel, evoking an India that fills the senses and stirs the spirit even as it occasionally turns the stomach.”
~ Publishers Weekly

Nearing age thirty, Amanda thought she’d be someone by now. Instead, she’s just herself: an ex-nanny, wannabe yogini who cranks out “For Idiots” travel guides just to scrape by. Yes, she has her sexy photographer boyfriend, but he’s usually gone—shooting a dogsled race in Alaska or a vision quest in Peru—or just hooking up with other girls. However, she’s sure her new assignment, “Enlightenment for Idiots,” will change everything; now she will become the serene, centered woman she was meant to be. After some breakup sex, she’s off to India to find a new, more spiritual life.

What she finds, though, is an ashram run by investment bankers, a yoga master who trashes her knee, and a guru with a weakness for fashion models. She escapes a tantra party at the Taj Hotel, has a nasty argument outside the cave where the Buddha used to meditate, then agonizes through the ten-day meditation retreat that’s supposed to make her feel better.

No, India is not what she’d pictured. But she finds a friend in Devi Das, a red-headed sadhu who refers to himself as “we.” And when a holy lunatic on the street offers her an enigmatic blessing, Amanda realizes a new life might be in store for her—just not the one she was expecting.

Praise for Enlightenment for Idiots:

“Cushman, coauthor of the nonfiction From Here to Nirvana and contributing editor to Yoga Journal, has written a hilarious take on the quest for truth that manages to respect the journey while skewering many of the travelers. Amanda, a 29-year-old fledgling yoga teacher, ekes out a living as a freelance writer in San Francisco and seizes the chance to go to India when her editor assigns her to research a guidebook about enlightenment. Soon she’s traipsing around India pursuing trendy gurus and yoga masters and scoring insightful encounters with ordinary folk along the way. She also collects a traveling companion: the sweet-natured, celibate truth seeker Devi Das, who, upon viewing the polluted Ganges, advises Amanda to “Think holy, not E. coli.” The discovery that she’s pregnant makes Amanda’s quest for meaning all the more poignant, forcing her to review her choices while she struggles to uncover the elusive secret to happiness. Cushman brings devastating wit and a thorough knowledge of her subject to her first novel, evoking an India that fills the senses and stirs the spirit even as it occasionally turns the stomach, and making it possible for the reader to both laugh with and root for Amanda as she comes to terms with her messy life.”
~ Publishers Weekly

“Each character is ripe for a little satire, which makes the novel a fun read, especially if you’re in on the joke (and even if you aren’t). Cushman also manages to capture the heart of their teachings, which gives the book another level of meaning…When you read between the lines for the wisdom that is woven throughout Cushman’s fun romp, this book serves as a call to enlightenment and an introduction to yoga philosophy.”
~ Yoga Journal

Cushman’s engaging debut novel follows Amanda, a 29-year-old yoga teacher in northern California, on a tumultuous journey to India and back again as she researches a guidebook on finding inner peace. Her quest becomes as much a personal journey as a writing project as she attempts to shake her attachment to her fickle photographer ex-boyfriend, Matt, and discover her own role in life. While in India, Amanda meets Devi Das, a celibate hippie with flowing dreadlocks who is looking for meaning in life following a personal tragedy. Together, they travel to ashrams and yoga centers from Bangalore to Mount Arunachala, all the while searching for elusive enlightenment. Cushman brilliantly interweaves snippets of Buddhist teachings with the mishaps and successes of their journey, infusing the book with wisdom and humor. Devi Das, an amusing philosopher-king who uses the royal “we,” helps her accomplish this goal. As for Cushman’s protagonist, when unexpected circumstances arise and Matt turns up in her life again, Amanda is forced to reexamine her search for enlightenment and where it may take her. Over the course of her quest, she realizes enlightenment may be closer to home than she imagined.
~ Booklist

“Cushman brilliantly interweaves snippets of Buddhist teachings with the mishaps and successes of their journey, infusing the book with wisdom and humor.”
~ Booklist, starred review

“Cushman’s send-up of the New Age American dream is both thoughtful and wise.”
~ The Shambhala Sun

“Equal parts “Sex and the City” and “Eat, Pray, Love,” Cushman’s novel sparkles with both sass and insight.”
~ Debra Galant, author of Rattled and Fear and Yoga in New Jersey

“You don’t have to know a Downward Dog from a cocker spaniel to fall in love with Enlightenment for Idiots. Anne Cushman takes you to India and offers up adventures both spiritual and earthbound with characters that will make you laugh then break your heart. And, in her heroine Amanda, she gives you a travel companion you’ll want to bring home long after you’ve turned the last page. This enlightening, entrancing novel is nirvana for smart readers.”
~ Mameve Medwed, author of How Elizabeth Barrett Browning Saved My Life and Of Men and Their Mothers.

“The amazing thing about this first novel is that you feel as though you are reading about your own life. The details are so honest; the writing so clear and sure-footed, sprinkled with great humor. Kudos to Cushman–this is a wonderful debut.”
~ Natalie Goldberg, author of Old Friend from Far Away and Writing Down the Bones.

“Charming, honest, and laugh-out-loud funny, Enlightenment for Idiots explores the very essence of what it means to be a seeker. Anne Cushman has taken her considerable knowledge of the yoga world and transformed it into a work of fiction as smart as it is moving.”
~ Dani Shapiro, author of Black & White and Family History.