Empty Before You Begin 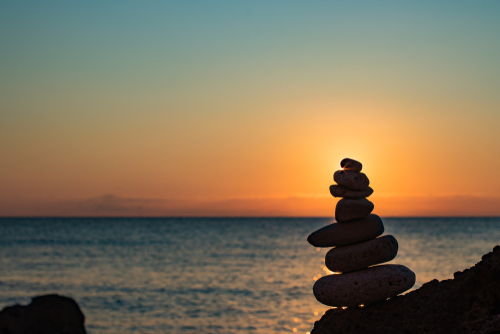 I’ve carved out more than a month this summer for a personal writing retreat– just before I lead my next Write Your Way Home women’s daylong, The Power of Place, online on July 10.

But for the first week of my retreat, I deliberately didn’t write a word.

Instead I spent six days meditating in silence at an almost-deserted beach on the northern California coast. I spent hours each day just walking barefoot on the dark, gritty sand; watching the waves that tumbled turquoise or grey in the shifting light; delighting in seals bobbing in the surf and the off-shore spouts of migrating whales.

It’s analogous to the way I begin a yoga practice—not by leaping into a Downward Dog or Sun Salutation, but by resting in stillness and waiting to see what wants to emerge. “Empty before you begin,” says one of my wise dharma-yoga friends, Tias Little. One of my earliest yoga inspirations, the rebel yogini Angela Farmer, used to offer “teacher un-trainings,” in which we let go of everything we thought we knew about asana practice so we could open to the intuitive wisdom of our own bodies. Meditation centers are more like Goodwill donation bins than shopping malls—you may think you’re coming on retreat to acquire something new, but really you’re dropping off all the old clutter that’s been clogging your psychospiritual closets.

“Feel the blank white piece of paper calling you,” painter Barbara Kaufman often urged on the Spirit of Creativity retreats I taught with her for a decade at Spirit Rock Meditation Center. But in order to feel the call, you first have to clear the page. As I head into the next few weeks of creative exploration, I’ve cancelled all my Zoom meetings and put an Away message on my email. But that’s the easy part. The hard part is to let go of my preconceived ideas about what’s going to emerge from my heart and mind. As Barbara used to say, if you already know what you’re going to paint, then you’ve closed down all the possibilities

And I know that “emptying” isn’t a one-and-done job. It’s a re-set I have to do multiple times a day—whether I’m letting go of a knot in my neck, an obsessive thought-spiral, or my time-blocked calendar plan. It’s a process that reminds me of the qigong Dissolving meditation my partner Teja Bell often leads in which you visualize your body turning from ice to water to mist.

So as we move into the heart of summer, wherever you are and whatever you’re up to—I hope you, too, have an opportunity to empty before you begin. Allow one exhalation to melt away before welcoming the next inhale. Spend an hour just gazing at the sky, watching the clouds dissolve and re-form. Let the blank white paper of your life call you. What color do you want to splash on it next?