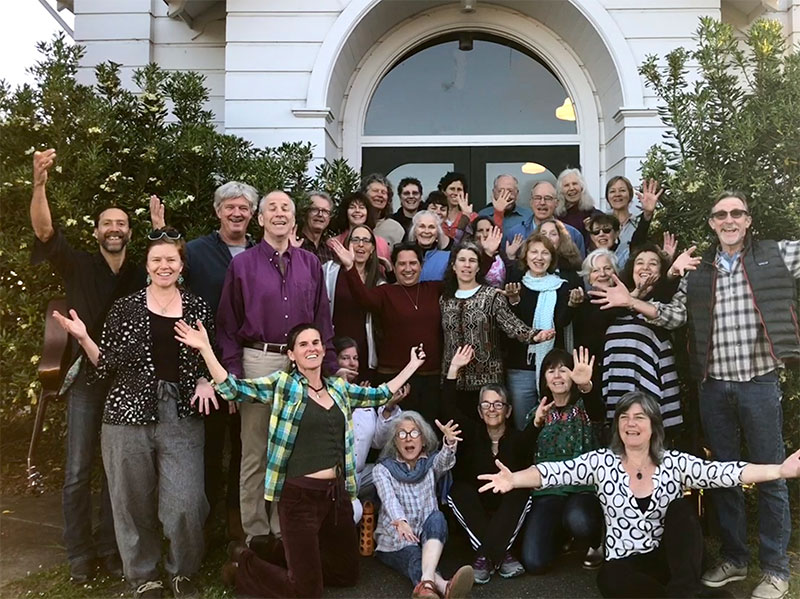 This spring I dropped the ball for a while on my New Year’s resolution to free up my singing voice. My first excuse: I spent nine days teaching in Germany, where I didn’t want to bombard my hotel neighbors and meditation students with my arpeggios and sirens. Back from Germany, I went straight into teaching another retreat at Spirit Rock. Then came a book deadline, a family visit, a week of online mentoring for a mindfulness teacher training—and suddenly I couldn’t connect with my original inspiration. There were just so many things on my to-do list that felt more urgent than limbering up my creaky voice.

But then I remembered one of the most vital elements of beginning, sustaining, or re-igniting any kind of practice: connecting with a community, or sangha. Whether it’s sitting on a meditation cushion, stretching into a Downward Dog, writing a novel, or water-coloring a hummingbird—it’s easier to do with the support of like-minded friends.

So in early April, I drove west out a winding country road lined with redwoods to the tiny, artsy town of Point Reyes Station to join the spring session of the West Marin Choir.

Their website encourages, “All voices are welcome, and absolutely no music or singing experience is required.” The choir leader, Debbie Daly—who also teaches yoga at the local studio—greeted me warmly when I walked into the former chapel that’s now the community center.

“That describes half the people in this chorus,” Debbie reassured me.

The other choir members began to arrive—a friendly, talkative group, most of us middle-aged or older. Hiking shoes and Bohemian layers abounded. I discovered I already knew some folks—the woman who led the wilderness visionquest I went on 25 years ago; the manager of a retreat I taught in New Mexico last year; the gardener who helped me plant an apple sapling that’s now bearing fruit in my back yard. In the circle of folding chairs, I took a seat in the alto section—Debbie’s best guess at my vocal range. I’d vaguely expected some sort of preliminary, entry-level assignment, or perhaps a musical bar exam I’d have to pass before being allowed to open my mouth. But to my amazement, after a few minutes of vocal warm-ups, we all just started to sing together. As if it were—well, natural.

Each six- to eight-week choir session culminates in an optional performance. For this round, the occasion is the Point Reyes “Western Weekend” festival. (The festival falls on my son’s high school graduation day, so I’ll have to miss our gig this time around). So our line-up includes a couple of cowboy songs, plus some sixties favorites thrown in “just because it’s the West Marin choir,” explained the woman next to me.

Debbie began teaching us our parts for an arrangement of the Beatles’ “Say the Word.” I experienced some basic brain-to-vocal-cord challenges—like, not knowing how to ensure that the note that comes out of my mouth matches the note I’m imagining. I learn the alto part, then promptly forget the tune as soon as I hear the tenor part.

But to my amazement, being part of a chorus made everything way, way easier. I felt buoyed up, guided, and held by the more experienced voices around me—like swimming with a school of fish through a river of music. As we sang in four-part harmony for my first time—“Say the word, and you’ll be free. Say the word, and be like me”–I felt exhilarated, thrilled. We sound fantastic! I sound fantastic! Well, OK, maybe that’s the person next to me—but hey! Who cares?We’re doing this together!

And just like that—I was back in the groove of singing again.

Singing with other people, I’ve discovered, is way, way more fun than trying to sing alone. Suddenly, I have specific songs to work on with my vocal coach—and a group of friendly, non-judgmental music-lovers who are depending on me to learn them. I’ve got a time and a place where I need to show up ready to sing every week.

Singing in harmony feels like it’s already starting to open up not just my voice, but my brain—wiring new circuits and reviving dormant ones. But more than that, it’s just plain fun. On my own, I’d probably never have found occasion to learn “The Old Chisolm Trail.” (“What does ‘I hung and rattled them longhorn cattle’ mean?” asked the alto sitting next to me, a curly-haired woman who’s originally from Hungary.) But after an hour and a half practicing it in harmony with others, I walked out the door wildly, unreasonably happy.

Apparently, this isn’t just a fluke. My quick Google search just turned up abundant scientific research indicating that singing is fantastic for the brain and that singing in groups is the most beneficial of all. In a recent article on Uplift, Cassandra Sheperd writes,

“The neuroscience of singing shows that when we sing our neurotransmitters connect in new and different ways. It fires up the right temporal lobe of our brain, releasing endorphins that make us smarter, healthier, happier and more creative. When we sing with other people this effect is amplified… Singing in groups triggers the communal release of serotonin and oxytocin, the bonding hormone, and even synchronizes our heart beats.”

Through natural selection, she speculates, group singing has “incentivized community over an ‘each cave dweller for themselves’ approach. Those who sang together were strongly bonded and survived.”

Sadly, this session of the choir is almost over. But I’m hooked—I’m signing up for the next one, which starts in August. And I’m reminded once again of the words of the Buddha, when his disciple Ananda told him that he had discovered through his many years of practice that community was half of the spiritual life. The Buddha responded, “No, Ananda! Don’t say that! Community is the whole of the spiritual life!”